Standard
Today I built a rack for my smoker. I picked up the base unit awhile back at the Salvation Army. I used some huge galvo wire for the frame, tied with thinner wire. I used a medium gauge wire for the rack supports. I bought some Dollar Tree cooling racks bent in my wooden bench vise with a mallet. It’s all set up. 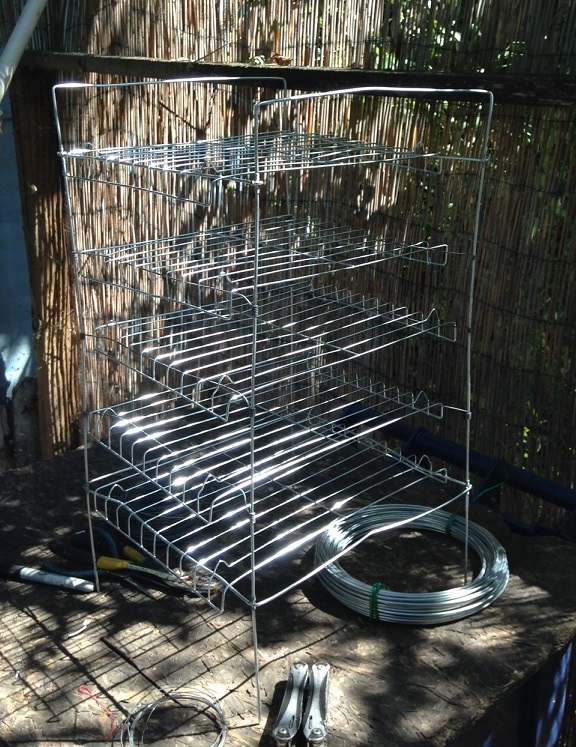 I found an old computer cover for the top for now, or a piece of plywood. 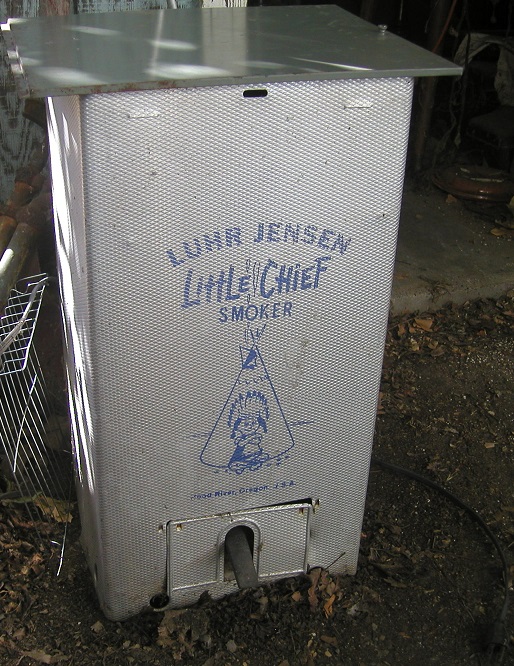 I know it works as I smoked some jerky strung on wires last year. To be sure I just loaded the wood pan with some hickory chips, we’ll see in a while. Another pic of the inside rack. 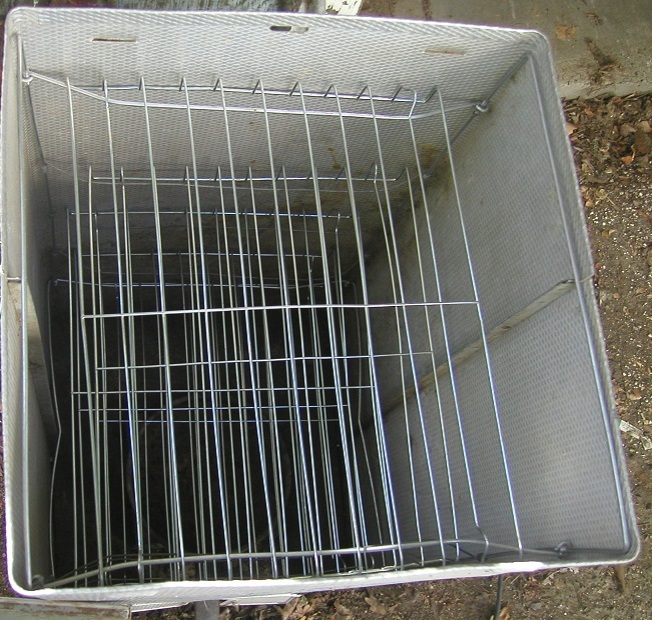 Just checked, yup, it’s working just fine, smoking the hickory chips. Now I just need to catch a few trout in the river. Or pick up some salmon at the store.
I’ll look up a few rub recipes online and modify as I don’t like the pepper blends.
Yesterday was blazing HOT here, well over a hundred. I sat in front of the fan sweating to keep cool. I modified an old handled hex wrench on the grinder quenched to create a really small 3/32 chisel. I used it to carve a channel in the next bass bridge to fit the piezo pickup. The chisel worked perfectly and the pickup fits flush to the bridge bone.
I’m just grateful today was tolerably cooler. Egg salad and tuna salad for cool sandwiches prepared for the week ahead, with Larrupin mustard dill sauce, yum.
I picked up a tacky Smart watch on Amazon for cheap, just to see how it works. It picks up my cell phone on Bluetooth, plays music aloud, makes calls, calculator, pedometer, sleep monitor, not much else. This morning it woke me up (off my wrist) wanting a charge. Good thing it was cheap.
Watched “Joy of Tech” on Netflix, fun show. A couple English blokes, one with good tech stuff, the other no tech destructive of the tech. Fun to watch.
A good weekend.
Standard
Today was fun. I made Pasta Fagioli soup, four cartons and lunch. Next I made chicken noodle soup, three cartons. I prepared all the veggies at once for both batches, farmers market carrots, cabbage, mushrooms, Safeway onions, celery. TJ beans, pinto, kidney and pasta bow ties. I used TJ two buck white wine and chicken broth, added left over smoked turkey and frozen cooked bacon to the fagioli, fresh chicken breast with noodles, garden herbs for all. Yum.
I finally got to work on the second bass ukulele. I notched out the neck with a chisel down to the pre cut saw kerfs to accept the soundboard. I surface sanded the soundboard to flat, marked it and sawed it out wide to shape on the band saw. I marked the joint where the soundboard meets the neck square and cut it close, then sanded it to true.
The bridge has been difficult with the Foredom hand piece slipping, so I’m preparing the preliminary piece I made before to work. It’s hardwood flooring, maybe Jacoba, same as the fret board. I had to re cut the slot for the bone bridge wider using a ruler, knife, chisel and file to make it straight. Sanded down it’s looking good. I’ll need to buy another beef bone to get a good size chunk for the bridge. Not vegetarian, oh well.

I made a batch of crostinis from yesterdays baguette, olive oil, salt, basil, Parmesan, left out the garlic for Scott’s wife. There’s enough in the soup.
Standard
It’s been awhile. This is the first weekend home in over three weeks. We had a Bolinas family reunion, great fun with Dad’s half the family at the Barge in Bolinas. sister Cathy, her Elliot, surf fishing with my cousin Jim, his wife Deb, his sister Laurie, Jeff taking pictures, kids Lucky, Lane plus their spouses, Aunts Julie and Sue.
The following weekend was in Arcata/Eureka helping in the Kinetic Sculpture Race once again with my friend Michael. That was fun, I even made a sedge grass basket while waiting, similar to my first wispy baskets. While driving out of the grass parking lot I hit a big pothole and damaged the front end of the car, oh no. I left it up there with friend Sean’s mechanic and rented a car to get home.
Last weekend I drove back up to retrieve the car, short trip but a good one.
Today it’s good to be home. Trip to the Farmers Market, good to see friends. There will be a potluck at work next Wednesday.
They like my enchiladas, but for a change I’m making a vegetarian batch using canned green jack fruit from Trader Joe’s. Interesting stuff, shreds with a couple forks resembling pork, although it tooth feels similar to an artichoke, vegetable but not stringy, a little chewy. Two cans shredded, squeeze the water out and fry crisp a bit like carnitas. I had to pick up more cumin at the corner store, whole seeds, I toasted and ground in a mortar pestle, plus fresh garlic to the jack fruit. I chopped Duncan’s mushrooms in long strips to match fried near crisp separate in olive oil, an onion chopped and fried. Two cans of O black beans and one of corn, a red bell pepper chopped, chopped black olives, red enchilada sauce thickened with corn starch on the stove added in with half saved for later. I added half a lemon juice to the batch, in a big bowl sealed chilled in the fridge ready.
I bought mild cheddar cheese and sour cream to make the enchiladas, but some folks are vegan, no dairy. Google that, back to town, Shelton’s for cashews, a little brewers yeast and another lemon. I soaked a healthy cup of cashew pieces in water for a couple hours, picked some parsley and first tarragon from the garden. Chopped a half a garlic clove, with two spoonfuls of yeast flakes, turmeric for color, half the lemon juiced added to the batch. I used Gary’s food processor to blend it up. I had to modify it with a sliced plastic lid to keep the stuff inside as I can’t find that attachment. It worked.
I have a fine batch of cashew spread fake cheese, very tasty. I’ll make up the enchiladas Tuesday night with corn tortillas and sauce. A thin layer of sauce, the torts rolled with cheese inside seam down, more sauce and cheese. A separate vegan batch using the cashew sauce first, then the next batch with cream. They’ll be good.
Practicing “Sunshine of your Love” by Cream on the bass uke. The electronics still don’t work, but it’s fun to play.
Tomorrow I plan on laundry, working on the second bass, a batch of pasta fagioli soup, perhaps some chicken noodle. I need to restock my lunch menu as I’m running low on home cooked food choices. Should be fun.