That and a batch of homemade mushroom soup, tasty and light after yesterdays feast of smoked turkey. Have a Happy New Year!

Standard
A good day today. Yesterday eve I decided to go North to Cloverdale in search of almonds at Ray’s as I remember they sometimes have Meyer lemons this time of year. They did have the lemons, I bought 3 pounds. No bulk almonds yet. I got home and cut them up prepped in the fridge to soak and process today.
This morning, oh man it was cold last night, heater on in the middle of the night. When I finally crawled out of bed watching movies until 10 it was still 34 degrees outside. Laundry in. Heading to town for coffee and almonds, more sugar for the marmalade, powdered sugar for almond paste and frosting. A pound of raw bulk almonds, yeast, sour cream and cream cheese for the danish filling.
Back home, I blanched and shucked the almond skins. Joe called, “Yea, come on out.” I dried the almonds in the already on oven for the heat. It took several times blending and sifting to get the almonds to fine flour in small batches. I set aside some to sliver for topping, two cups for paste. I put on the lemons with two more (four total) cups water to dissolve the matching 3 pounds of sugar using my big dog bowl shaped pan. Stir often.
Joe showed up, I gave him a bag of marbles I bought to use in his wire bending endeavors. He didn’t use them yet, but that trade covered the eggs he bought me I’ll need for coffee cakes. I didn’t make the coffee cakes yet, next week end. Four egg whites and half the 3 cups (1 1/2) powdered sugar called for with a cap full of almond extract made a large batch of almond paste. There is a lot there, in a baggie waiting as the flavor marries.
***
Almond Paste
1 cup almonds blended fine, 1 1/2 cups powdered sugar, 2 egg whites beaten frothed mixed. That’s the French recipe. I doubled the recipe and cut the sugar in half.
***
Meanwhile, Joe’s bending wire as I cooked down the marmalade, I got a full dozen small four ounce jars and one more full cup, plus a not sealed small jar for Joe. He already has a sealed cup from last week.
We snacked on Joe’s baguette, cheese, and some bacon I cooked up.
Outside in the sun, I cut up a Nylon bag I picked up at Salvation Army. I sewed it up on the sewing machine to make a sock to cover the bass head as the case I have isn’t long enough.

This one works great, yesterdays attempt was too small. I also managed to modify the bass guitar strap top button to fit the curve of the horn using the lapidary sander and sandpaper.

I picked up a cool teak roll deck card holder at Sally’s and gave that to Joe, he’s jazzed with it.
I slivered the remaining almonds and toasted them in a pan while Joe bent more wire. Ready for the Almond Tea Ring Christmas morning. I’ll make it Saturday, Christmas eve to bake Christmas morning.
Laundry is done and the aprons are also washed ready to smoke a Christmas turkey. I think we’re mostly ready.
Merry Christmas.
Standard
I got ten more boards rough sanded today on Mira’s gate, total 14 of 32, a few hours. Here is the plan. 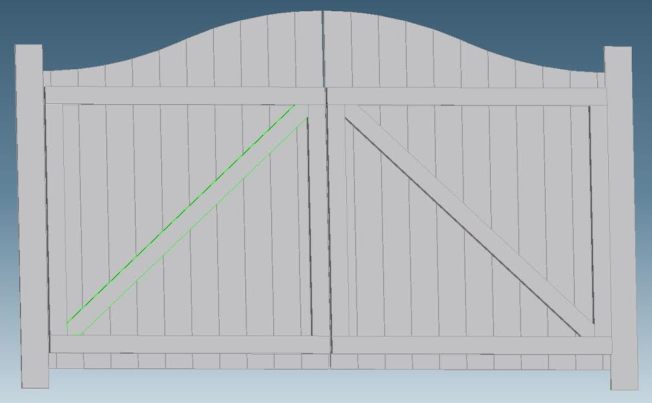 My buddy Joe showed up, We played the new bass, he was impressed with it. It’s hard playing bass, a stretch and huge strings wear your fingers out but good fun. I guess with practice.
I also turned another strap button on my lathe out of rosewood. Now I have the last two pieces, just needing a couple pan head screws to complete the bass.

It will need a strap and peripherals, but the instrument is mostly ready. It still needs to be set up with truss rod adjustments and additional fret work, possibly a shim under the nut. I’m not sure. I need to bring it in to work this week for some professional feedback. A full year in the making.
Cooking was a fun weekend, two chickens on sale at 79 cents a pound. I brined one, left the other one. I cooked them both today in the oven, 400 backed down to 375. The non brined one was done first at 165 F inside the leg breast. I guess the extra moisture takes longer to cook. I also made a batch of Alfredo sauce, but I used a butter flour roux to keep it from separating, garlic and garden herbs, heavy cream and Parmesan.  Spaghetti noodles on.
Joe showed up in time for lunch of chicken Alfredo. Tasty, though a bit thick on the sauce, thinned. Good thing he can take some home as there’s so much chicken.
He bent some wire card holders as I sanded gate boards, good fun.
Yesterday at Salvation Army I scored a new (to me) cutting board to fit my counter, as well as a clarinet reed head, Good fun noise maker with instrument potential.
A fine weekend.
Standard
An interesting weekend. Yesterday coffee and shopping, I miss the Saturday farmers market. On the way home I stopped at Sally’s, found a trophy for Cathy’s gang for bowling,

a new miter saw attachment and a seed spreader for Joe. Also a nice pouch I put in the craft box for Raven. I scored a new carbide 10″ saw blade as well. I made a batch of beef stroganoff without the sour cream yet and a bunch of noodles. Alan is lactose intolerant. Me, I’m pepper intolerant. Next I made a chicken soup with some of the noodles, a fine batch.
I worked a bit on the ukulele frame, adding 1/2 inch standoffs of wood and MDF to hold the frame up for attaching the kerf boards to the sides. 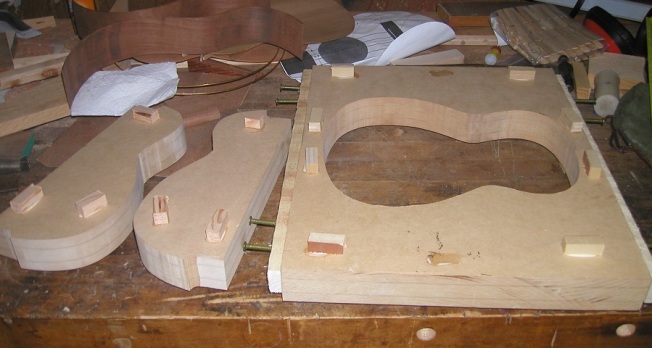 Today I headed South as I need to get the pump working on the boat and Mira wants a new gate. A stop at West Marine agreed to exchange the battery charger I bought last week for a new pump, with a ten dollar refund. That worked, with a little jury rigging for now, direct to the old charger, the new pump works fine. Good for the winter rains.
On to Oakland, to Mira and Shira’s place, just a few blocks from Elliot’s. I took measurements for a new gate. They’ve decided to keep it in the same location, the posts will be helpful for installing it. A simple adjustment of the pins around the posts to tune the gate should work. Four inches high to avoid the ground and raise the gate. The plan is a 6 foot arch center up with tangent arches on the sides down of the same radius. Two by four stock for a frame. It will be a good gate. Elliot’s not home, heading North.
A brief stop at Joe’s, he’s not home either, but a call connected us. I left him the seed spreader.
Homeward, to dry the laundry, took a while. I dug out a nice piece of rosewood, cut a chunk and mounted it to the lathe. I used the four jaw chuck to mount the square piece with a live center on the end. Turned, drilled, sanded and cut off. The first piece looks good. I’ll need to make another one, but the stock in the lathe is ready.