I tied the new tarp on the boat before Raven got here as it’s lightly raining. She arrived with samples of salmon jerky and a damiana chocolate elixir she made, tasty but better not mixed. Due to the rain we worked on cutting more stencils for the cabinet doors, I worked the clovers as Raven finished the roses and vines.

Getting hungry, I cooked up some sprouted wheat grilled cheese sandwiches and organic tomato soup from Shelton’s, a good rainy day comfort meal. She told me of last weeks adventure of the Fear FestEvil put on by Metalica’s Kirk Hammet, she worked it, also meeting several horror movie actors, a bucket list accomplishment.

Raven kept cutting the vine stencil as I went out to glue down the shelf behind the stove, the splash guard and re install the stove. The burners are a bit rusty but will burn off on ignition. I found the flex gas hose and fitting in the vardo, it needs Teflon tape, off to Harry’s up at the corner, the gas stuff costs more in yellow. I had to unlatch the main sink underneath to get the stove in, a feature I planned in. 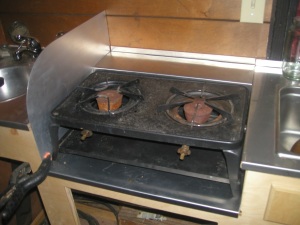 We took a walk to the river with umbrellas, it’s down but there are signs of last weekends rain raised with flotsam in the lower trees, not much as it’s a dry winter so far. We need this rain.

Raven started painting the cabinet doors using the stencils. I bought a sort of French press last week at Salvation Army for $3 but it doesn’t slide, found the old mechanism and butched together the pieces, works well.  I went out and pulled the coffee burlap bag from the gas tanks and hooked up the gas lines with tanks turned off. I want to cover the tanks and hoses in burlap to look traditional but mostly to protect the equipment and hoses from the weather. I brought in the coffee bag and cut it open to a full sheet of burlap, then rough fitted it to the tanks. It will need some stitching with the jute I bought at the dollar store.

Raven got quite a bit done on the cabinet doors, though she wants to touch up the black background.

She also got half the vines done but wants to finish before posting the picture. Pictures taken, posted here, a productive day.